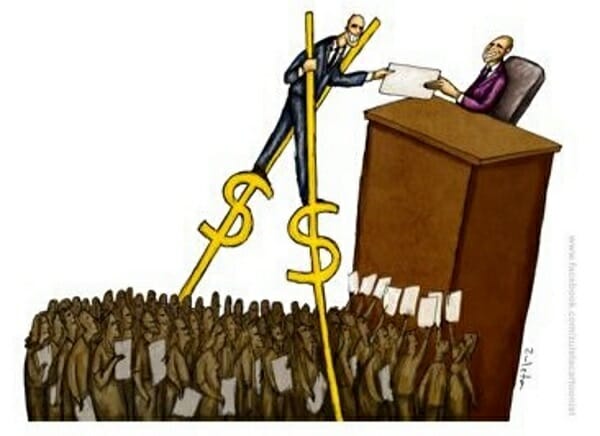 Until now, strategies for citizens to obtain quality and low prices in natural monopolies have failed. In the case of public companies waste, bureaucracy and / or low quality of service characterizes them, and being private companies the public regulator is corrupted to the highest bidder. What other strategy can solve this problem?

There are sectors of production system of goods and services, which are naturally a monopoly, for example water, you can not change the company that brings water to your home, since you would have to change the water pipes. The same happens with electricity, gas, transportation and many more, even the government itself is a natural monopoly, that is, there are not several parallel options for mayor, so if you do not like a mayor you can change to another mayor.

The problem is that bureaucrats and / or private companies, lose the fear of being replaced and inaction seizes them, doing only the minimum possible only to self-justify instead of the best possible for citizenship.

As authors of The Fundamental Laws of the Economy we know that the problem of monopolies is due to the absence of the second law, the law of competition, which produces the effects we see: high prices and poor service.

Traditionally, the solution has been to regulate the sector and to make bids every so often. This solution tries to provide competition and regulate it only every so often, not continuously. Such is the case of the public sector with the elections, where the politicians and the government party are put to work and offer solutions only before the elections, after being elected when the electoral competition is over, they return to bad service, the bureaucracy. In the private sector, the regulator often ends up being a corrupt bureaucracy that is only there to serve itself, and companies only produce improvements in the dates of the tender, if there is any type of bidding.

How do we create constant competition in natural monopolies?

Our solution is to add an intermediary company. This company is responsible for the administration of the common physical resource, (these resources do not include employees), for example for water service: pipes, stopcocks, pumps, water tanks and others. This company would be tendered every certain time, at least every year. The end user does not interact with this intermediary company.

The final companies, as they are highly motivated to win customers, have low costs and increase their profits, are in charge of keeping the administrative company with low bureaucracy and high quality, this forces the intermediary and final companies to apply all the innovations that they produce greater profitability.

The regulatory body, the State, limits itself as established in our constitution of E-Nation to the creation and supervision of the indicators matrix (Indicators of the Economy of Mutual Welfare) of the intermediary company, where its public evaluation is included. transparent by the final companies.

Note 1: It is not a problem that the employees of any company, whether of the intermediary company or the final company, are left without employment, since the income security of the employees in our model of society is a social issue and not of the companies Universal Minimum Income and Basic Salaried Insured.

Note 2: For the other monopolies that citizens have assumed as monopolies, but are not natural monopolies, such as the police service, firemen and others, the solution is obviously the same, add competition.

This solution to natural monopolies, is based on field experiences that prove to be the most efficient, and is the same solution that is made in the world of software.

In this way we have presented a general solution applicable to all natural monopolies, which provides the best quality to citizens in an environment of continuous improvement and decrease in prices.