Telegony, the social atomic bomb that explains this violent society. 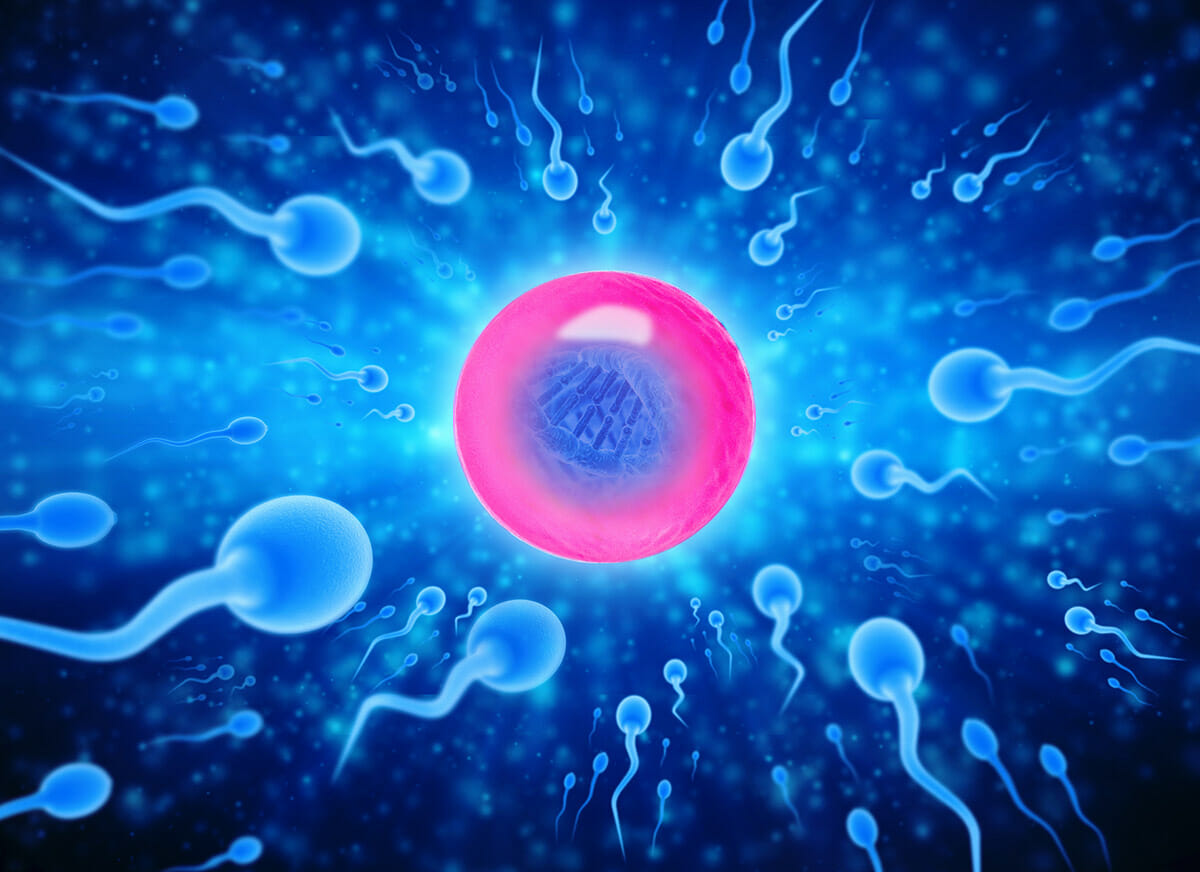 The study of biology allows us to better understand human behavior. It is the vain pride of the human being, which makes us believe that by using toilet paper we are no longer animals or follow the biological instinct. Of course this does not mean that we can not change our behavior, we can change it, but first we have to recognize our basic behaviors to change them in what society best suits us.

It is the ability of males to transmit hereditary factors in the offspring of a female without being the progenitor, because the females are impregnated for life, of the hereditary factors of the males with which they have copulated.

The offspring inherit characteristics acquired from the mother’s previous partner

Differential effects of male nutritional balance on pre and post copulatory traits, and consequences for female reproduction in Drosophila melanogaster

The power of the female

Reproductive strategies of the male and female

A man with 50 women can have 50 children per year, a woman with 50 men can only have one child per year.

Women invest a lot in mating: pregnancy for 9 months, risk of death by birth of a child, care of the baby for years, etc.

In the case of the human being, the reproductive strategy of women is known as hypergamy.

The hypergamy of women and the opportunism of men are two sides of the same coin. Contrary to each other, and selfish each on their side.

Man and woman, have totally opposite reproductive strategies, so the stories of the prince who gets his princess or vice versa, are false constructions sold by the media with some mercantilist interest, that’s why the reality that arranged marriages have more possibility of that they last that the marriages of free election, since if it is of free election before the problems will always exist the possibility of returning to make a free election, and the divorce then is the consequent thing. The emotion of the first encounters that we call “love” is only a passing emotion, which will disappear before the internal clash of two different biological strategies. Love exists, if it is consciously constructed and maintained over time.

Telegony was rejected initially, due to the distortions imposed by Darwin’s evolutionary theory, which, as we have already analyzed, is mistaken, Biological Evolution, since it discards the horizontal transfer of hereditary factors and the determining influence of the environment.

Hereditary factors can be transmitted both horizontally (between individuals) and vertically (from parents to children). The bacteria exchange genetic material between them. The eukaryotic cells that are modern cells, and the base of animal and human plants, exchange hereditary material horizontally, is something totally verified in the plants.

Telegony is simply an exchange of hereditary material without fertilization, the woman simply receives and incorporates in itself the hereditary material to which it is exposed (seminal flow), this has already been discovered in animals (insects), which is verified in human beings, is only a matter of time, when real scientific studies can be carried out, that do not have to be in accordance with social trends (promiscuity) and government policy (pro feminist).

Telegony, means that the woman is a sponge of hereditary material, that is, a son of a woman who has had relations with several men, has in his body the hereditary material of all the men with whom he has copulated, for all his life, since she incorporate them into your body even in your still unfertilized cells (ovules).

Matriarchy: woman with many men.

Patriarchy: man with many women.

This means that telegony is a social atom bomb, since it has strong implications for the promiscuous society of today.

Only having children of a virgin, the man is sure that his son is his. But, it is the son is all the men who copulated with the woman, and ends up paying and raising the children of others. If the child belongs to everyone, then let the State be in charge (patriarchy with virtual male).

Telegony also implies that when the woman is free to choose a partner, she will tend to practice hypergamy, looking for the man who seems the best procreator and the most violent, the so-called bad guys, that is, the woman’s mind involutes to her remote past hominid, the violence of the patriarchy of the alpha male gorilla tall of large muscles with harem, with the rest of males without a woman and being slaves of the alpha male.

The hypergamy of women leads to a more violent society, since men now compete much more for the sexual favor of women, men become more violent among themselves and with women.

This violent society reinforces the need of women in their youth to seek the most violent man to protect them. When the woman loses her youth, is no longer of sexual interest to the violent procreator, the bad guys, then there is no other option for the woman than to choose one of the males that she rejected in her youth.

The problem of this mature and promiscuous woman, is that she no longer serves as a mother of children for the man who was previously rejected, and who is now accepted as a sexual partner, since the offspring of the promiscuous woman will have hereditary factors of all men with which she copulate in her life.

Telegony would also explain, because the intelligence tests since the 70s, indicate that the population is every generation is more foolish than the previous one. Confusion of hereditary factors due to promiscuous mothers. Idiocracy, a comic science fiction film that ended up being a documentary.

The biological imperative and modern feminism

The human being thinks that by using toilet paper, he is no longer an animal, and does not act by following his basic biological instincts. Nothing is further from reality, the human being has a basically animal behavior, which is dictated by its nature.

Feminism is implanting laws throughout the Western world like “only yes is yes”, Example: if a man peacefully takes a woman to a hotel, and the woman knows it is a hotel, if the woman does not say explicitly: “Yes I want to have sex with you” and have sex, and this sentence is properly documented, the woman when leaving the hotel can say that she was raped, suffered sexual abuse, and the man goes to prison if he does not have a “yes” demonstration of woman. Which presents the woman as a being incapable of making adequate sexual decisions and that therefore must be protected. Well-informed people have come out to criticize this type of law, because it is impracticable, unjust and violates the principle of innocence.

Biology clearly explains what is happening, young women are highly influenced in their behavior by their biological imperative to reproduce the species, a fact demonstrated by the great success of the method of seduction called “Mystery”, or because women like music from sexual orientation that denigrates them as regggeton, which effectively presents the young woman as incapable of making adequate sexual decisions, and therefore must be protected both from herself and from the natural opportunistic strategy of men.

So, if the biological reality is that the young woman is not able to make adequate sexual decisions, then the young woman can not be given the power of sexual freedom, since she does not have the capacity to use that freedom adequately, and therefore must be protected from itself, leaving this freedom under the exclusive guardianship of their parents.

Experiment of the universe 25, the violent society

The experiment of the universe 25, presents what happens in a society with an abundance of resources but violent, in this violent case for not having more space where they can reproduce. With these results we can predict that due to the promiscuity of women and men, a violent society is created, and therefore will lead the human being to extinction in 4 stages.

The sexual behavior of monkeys describes the following behavior: if they live in societies and are violent, then they are like gorillas, the alpha male, patriarchy. If they live in society and are peaceful then the relationships are totally promiscuous as are the chimpanzees, bonobo, with the female losing the power to decide with which male to copulate, the female has to copulate with all the males of the group, without being able to refuse. Monogamy does not exist in monkeys with narrow societies, but in closely related societies, such as the gibbon.

Faced with the reality of the high intelligence of man, and its high lethal power and violence, a violent society ends in its extinction, therefore the human being can only live in peaceful societies. What leaves two options of society:

The most egalitarian societies, which are neither matriarchal nor patriarchal, are societies of virginal monogamous norms imposed (not natural).

In these egalitarian societies, the value of the human being, regardless of sex, is his personal growth, the development of his human values, which are mental values, since the dominion that man has over all other species is by his mental abilities and not because they are faster, stronger or bigger, that is why mental values are much more important than physical values. In second place, from the sexual point of view, for man the value of a woman is dictated by her virginity and fidelity, and her beauty, for women, the value of men is their ability to provide and protect.

On the other hand, in the promiscuous societies of today, for the man and the woman, the value of the human being is only his physical and his money. 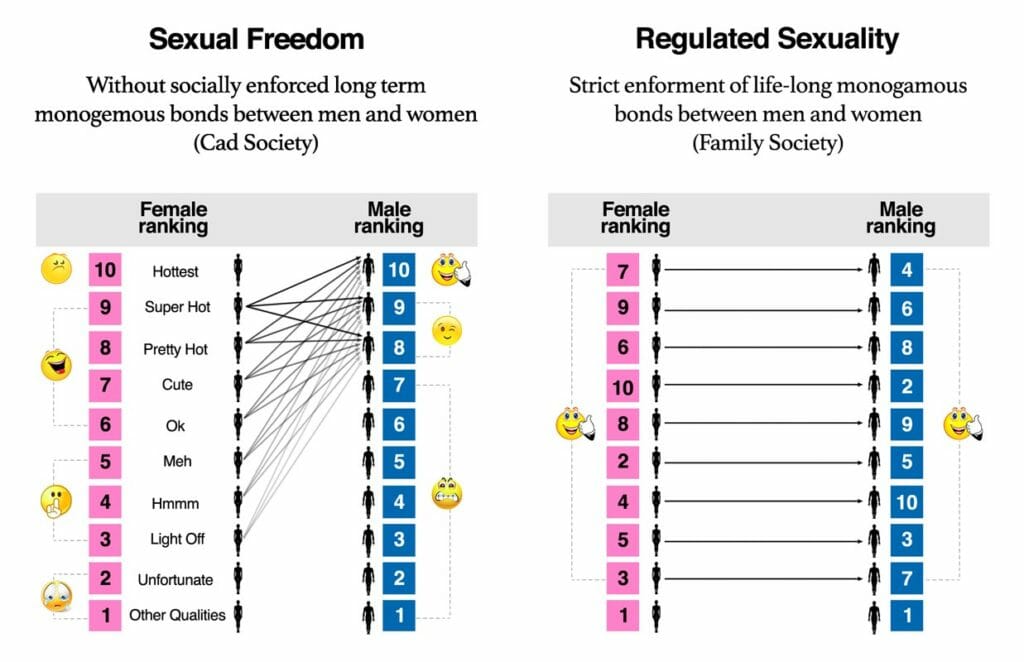 The current promiscuous society not only generate violence, but also selfish human beings, who highlight the worst of the human being: lying, deceit and stupidity, since they maximize pleasure in the present for a future of devastating suffering.