The Problem of the Religions and the Science 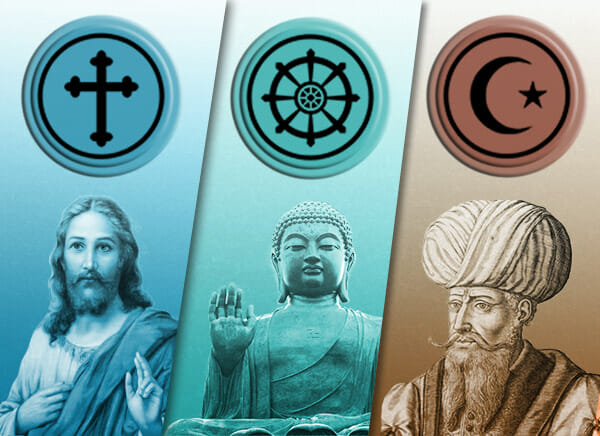 The religions and the science, are important because they mean an attempt to give a response to the question:

A person without any purpose is like a machine. Hence, answering these types of questions is essential. In this edition, we will talk about the problem of the religions and the science.

Why should we care about the religions, if all have failed in their objectives of bringing peace to the world?

Not even the oldest religions like the Egyptian or Greek Pantheon, nor the most common like the Christianism, Islam, and Buddhism, nor the newest ones like the Communism of Marx or the Scientology of Ron Hubbard have ever succeeded. Each one of them has failed in bringing peace to the world, even inside their own circles.

We will talk about this subject in the most serious and objective way possible. We don’t pretend to make this article so long, hence, we will limit to express the main failures of the religions, no intention to criticize them, but aiming to express a solution to the current mistakes.

This is aimed at the persons who seek for the truth. On the contrary, those who are blind to a system of beliefs, be it religious or not, that limit their capacity to make questions, should abstain from continue reading.

The analysis of the religions is a prohibited topic in our society (even punishable with the death in the most backward cultures). Making that few take the time to analyze, understand and explain the religions.

Here we are trying to correct this mistake. We are at the end of the industrial era and the beginning of the knowledge era. Thus, we cannot leave out of the analysis everything the human being has done in his history, the religions cannot be the exception.

In a previous article, we described the origin of the religions along with the history of the Christianism, Spirituality in the XXI Century.

Philosophy. Description about how the humankind should behave.

Worship. Rules that describe the behavior of the man with “entities”. Be it a god, several gods, aliens, and so on.

Religion. Description of the relation man-to-man, and man-to-“god”. Religion=philosophy + worship.

Science. The study of the nature using the scientific method.

Origin of the Spirituality (Religions and Worships). The experience of two contradictory phenomena (orthogonal)

Religions strive to explain those phenomena giving diverse responses: two gods, many gods, a forgotten creation, one god, and so on.

The Failure of the Christianism

The Christianism asks to put the neighbor on a superior level to oneself, asks the humankind for so much:

If it asked equal importance between the human beings, it would be a difficult goal yet achievable.

If we read the mountain preach, we see how Jesus expresses himself:

Matthew 5:38 You have heard the saying: “An eye for an eye, and a tooth for a tooth”. 39 But I say this: “do not resist to who is bad; but, to whoever slaps you on the right cheek, turn back the other one as well”

We all know that the human being is by nature selfish, bad, and with the great sacrifice, the Christianism asks its followers, the mistake of a Christian leader is a strong discouragement for the followers of the Christianism. Even not all the priests and preachers fall into diverse sexual and money problems. The facts of the pedophilia and money laundering have been so notorious.

The Failure of Buddhism

The suppression of the desire leads us to a stalemate state. While it’s true that if

It is a positive stage in the life, since it shows self-control, but it doesn’t solve the problem of desire, because it compresses the desire to exploit it afterward or it takes us to the stalemate, being like stones. Because whoever doesn’t want anything won’t do anything as well.

Without desire, there is no development, no products, no services, nothing.

The Failure of the Islam

The union through the division into good and bad, plus a materialist paradise, doesn’t ever produce peace nor a social development. Saying that the believers are good and the non-believers are bad, it creates a division which is good to unite the believers. This polarization technique is used a lot in the communist dictatorships and the sports events (such as Real Madrid vs Barcelona). But it is bad since it produces human beings superior to others, and without equality of importance, there won’t be peace in the world, because even if we were all believers, they wouldn’t exist the strength to remain united and the division would appear again, this time between the more believers and the not-so-much believers.

And with the materialist Paradise, of sex and food, why to strive for building this world? Hence, for the Muslims with material desires and little capability of satisfying their desires, the life in the paradise is more desirable than the real life. If we add to it that, a mechanism for the forgiveness of sins is the murder of the “non-believers”, therefore we will have the perfect excuse for the terrorist radicalization.

As explained earlier, the Islam works perfectly for the populations of low culture, which have material deficiencies. Though all the religions have been used as control tools, the Islam highlights as the best to be used by dictators like a mechanism of population control. For this divisive fundamental reasons, the Islam and the real democracy don’t go hand in hand, but the Islam and the dictatorships are love at first sight.

Koran 5:51 Y’all believers (Muslims)! Do not take the Jews and Christians as friends; They are friends one another, and whoever between you take thee as a friend, then certainly it is one of them; Alá doesn’t guide the injustice people.

The selfish nature of the man is perfectly aligned with the Islam. On one side, the selfish desire of feeling better than the others for being a believer satisfies them, while it releases the human wickedness in bringing down the “non-believers” into a second class.

The Failure of the Judaism

The Judaism remained stuck in time, living in its glorious past without producing new achievements. Like all the religions, the Judaism is a religion made by the man, and from it and the Islam the creators of the Christianism took note, to take what was most suitable as per their purposes, which doesn’t even imply the Christianism and Islam having the same basis, but having elements of the Jewish Religion. In fact, just a few, being the Islam the one with less Jewish elements.

The Judaism is not even a monolithic religion, there are diverse interpretations of it. In fact, we see that Jesus from Nazareth and his apostles, Matthew 5:17 and Joseph 4:9, they always considered themselves as Jews and didn’t think of creating a new religion, but they did express a totally different interpretation from the traditional religious Jews (Pharisees). Indeed, their differences were so big that two Jewish groups (Pharisees and Sadducees) conspired for the elimination of the leader of the other Jews group (the followers of Jesus), who thought the path for resolving their differences was the love. The history confirmed the criticisms Jesus made about the Pharisees and Sadducees, who were hypocrites, Matthew 23.

The Judaism brought to the man the advanced idea of the existence of one god, but it didn’t continue from that and kept repeating for two thousand years the same histories, without bringing any new interpretation, nor explaining the advances in a clear language, suitable for the current audience, they were left in the past.

The Failure of the “Science”

The science is changing, and generally is contradicting itself every now and then. Let’s see some examples:

1.500 -> Coppernico and Galilei, fought against the intellectual elites (not just the Church) with their theory about the Earth going around the sun.
1.860 -> Semmelweis, fought against the medical elite, was banished and mocked for saying that the doctors would have to wash their hands before touching some patient.

Where is really failing the science? Analyzing carefully these cases, we realize that the scientific method didn’t fail, the human being was the one who did it when applying it wrongly.

How can the scientists fail in applying the scientific method? The human being is naturally selfish, and when applying it, does it selfishly. It requires an open mind, not a selfish one that closes defending its point of view.

Hence, we may conclude that it is not possible to apply the scientific method, without resolving the problem of the viewer’s selfishness; and to complicate even more this matter, it is so probable that an open-minded successful scientist, with the passing time, due to his success, closes his mind and doesn’t accept discoveries that challenge his selfish ego.

We may conclude that the real science doesn’t fail, but it is being polished and enhanced with the time.

From the Failure of the Man to the Kabbalah of Laitman

The science, with its scientific method, has shown with facts, that it can improve the mankind’s life. Giving any kind of material benefits. In fact, nowadays, we could live in an abundance paradise for everybody. And we don’t do it, because of our selfish nature, that makes us fight one another, embittering between us.

We are like a firefighters group, trying to turn the fire off with a water jet, but from the hose barely runs water, though it has plenty of water and pressure, we blame each other, and after a while, tired of arguing, we come up with checking the hose, and we realize that:

The Kabbalah is a real science based on a strict bonding to the scientific method, it develops the topic:

During the development of such inquiry, the Kabbalah came up with two contradictory phenomena, that we have already described as the religion source, and it gives us an answer. But to explain it better, it’s required solving the problem of the viewer selfishness. That is, it is necessary to work first on the Kabbalah student, pulling him out of his natural selfish view, so that he can understand the answer.

And as we can see, if we could solve the natural selfishness problem of the human being, we might solve all the mankind problems. Since nowadays, we have the technology to do it.

And they lived happily forever… MISTAKE.

The human being doesn’t want to change his natural selfish mode, but all the opposite, he wants the whole world to serve him.

In this way, we have gotten to the year 2017. All our institutions have fallen apart in front of our eyes, the universities don’t educate anymore, but indoctrinate and don’t let the free expression. The politicians do not work for the good of the people any longer, but for their own good.

The means do not inform anymore but create and indoctrinate their selfish and paid view. The art is not about the beauty and mastery but of the selfish expression. In the economy, the people who make much money, are not the ones who work hard, they are the casino gamblers at Wallstreet! That is crazy. We are not motivating people to work hard, but all the opposite, we are furthering the robbery and the scam. The religions that should bring peace to the world, have brought war, division and terrorism, just the opposite. To top it all up, the new generation knows even the last minimum detail about the celebrities’ gossips, pop music and sexual positions, and almost nothing about history, human values, and science.

So, we have arrived in a great crisis, a human level crisis, since there is plenty of resources and technology. It is a human relation crisis. Generated by the natural human selfishness.