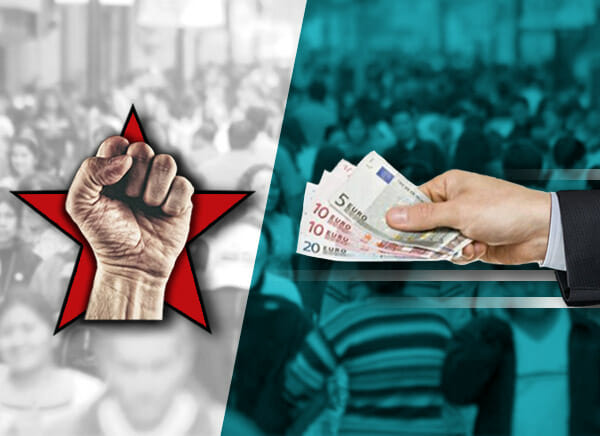 Eduardo Garzón writes us excellent Universal Basic Income Criticisms from the Leftist. Before giving an answer, we should start from two important elements:

With the previous remarks, let’s start stating these points of view:

First with the Suppositions of What the Right-wing Says

A. “There is not enough money to apply the measure”. We agree that there is money, but it is wrongly distributed, in corruption, overprice and, unnecessary things like the war. We have more than enough money, for everybody.

B. “It is not fair that someone who is not working gets an income”. We agree, but that expression comes from the human being selfishness because there are many groups who get billions of Euros without doing nothing, the landlords exist, and there are no demonstrations against it.

C. “Call effect”, this is totally true, and since we cannot change all the governments of the world at once, the necessary rules must be done to avoid being filled up with foreigners.

1. Do not give money, but goods: and here, I can only wonder, since when it’s said “The State provides education and health care, directly to the beneficiary” My fellows, the State doesn’t create the materials for the analysis, it doesn’t even create the medicines. And as this basis is fake, everything falls.

And it proposes giving goods and services to the people. Then I wonder:

The State doesn’t make the food.

We are talking about deep basis problems at this point, we all are fascists.

Besides, what is the problem with the good capitalism? Are we going to stand up now for a communism that failed in the whole world? That is why it is important to understand this article, the 2 fundamental laws of the economy.

2. Excellent, and well argued. A BI (basic income) must have ethics or moral considerations. That is why we propose a change in the educational model towards a model with values, empathy, and science:

Moreover, the BI that we call Universal Minimum Income UMI, must be variable as per the welfare that collectively we are achieving, like a prize-punishment conduct, for the good or bad social behavior. With a mediatic campaign aligned with it.

3. “The BI may cause inflation”, this is a topic hard to understand the actual economy, not the economy taught at the university which is far from the truth. Let’s say it in short words: The inflation exists when the two fundamental laws of the economy are not met, and there exists a rejection to save in the current currency. For instance:

The definition of the amount of the BI is necessary. Because the scenario is different if it is 600€, or 2000€. Because with 600€ you can survive, but not live.

4. The BI as a subvention for the companies: Here it is argued the opposite of what was said in the previous point, about people would leave the employments that are paid badly for getting better ones. To clarify this point it is necessary defining well the amount of the BI.

Indeed, nowadays we do the contrary, we pay the companies, rescuing them, and lowering the taxes so that they can pay miserable salaries to the employees. The best thing should be giving the money directly to the people, rather than to the company. And then they can spend the money in whatever they want, as long as they don’t damage the society, which is the source of money.

5. The BI must be unconditional, and its funds come from eliminating the misuse and the corruption:

6. It is correct, the accounting technical details must be well analyzed and its arguments must be totally scientific, with the data in the hand, statistics, trends.

Some people, in the comments of such article, referred to the housing problem, and they wanted to solve it by blending it with a BI. And it is right, it is a related issue, but:

It is way much better finding a solution to the housing problem, defining well the purpose of what we want to achieve, by applying the 2 fundamental rules of the economy, and understanding well the supervisor problem, giving an authentic freedom without falling into impositions and other common selfish expressions, to create a system without the traditional failures of the past.

In another article, I will discuss better a proposal on the housing topic, since it is more complex than it seems. Because we must consider that we tend to live much more years than the natural. And hence, we must adjust the housing to that reality.

Our proposal considers a Universal Minimum Income, along with a system of social security, redefined to the current reality. It is not only adding another social system but about reconsidering all the society, its purpose and the best way to achieve that purpose:

And of course, starting with the fundamental basis first: a change in the educational model: